Glas Tulaichean and Carn an Righ

Last Sunday, 4th August, I headed off to Spittal of Glenshee for a 17-mile walk taking in two Munros; Glas Tulaichean and Carn an Righ.

Although the forecast was showery, I hoped the climbs and views would make up for the risk of getting a little wet.

Things started well, making my way up Glen Lochsie in glorious, warm sunshine. The sign is, however, rather misleading, referring to the hotel at the end of the tarmaced road – I still had a long, long way to go. 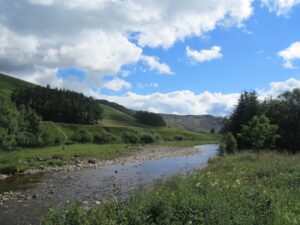 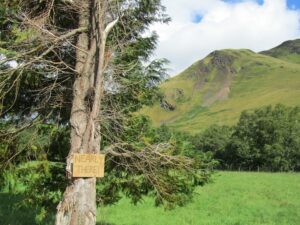 The lush, green valley is quickly left behind as I followed the unrelenting path to the summit of Glen Tulaichean. Not the most interesting climb, with a wide land rover track all the way to the top. Mind you, I was also biased against it as showers started to blow in and I quickly went from shorts and t-shirt to full waterproofs. The summit was in cloud as I stopped for an eerie, atmospheric break and bite to eat. The clouds soon cleared as I continued on, giving sunny views to the north. 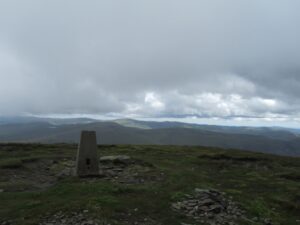 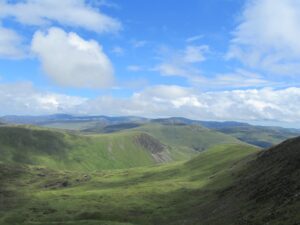 The route drops down and along another glen before climbing steeply again to the top of Carn an Righ. The route through the glen, along a springy peat path strewn with blindingly-white quartz, made for a quick transition to the next ascent. Another shower passed over as I reached the summit, making for another pause wrapped up well against the elements. This soon passed, and the mighty presence of Beinn a’Ghlo emerged to the west. 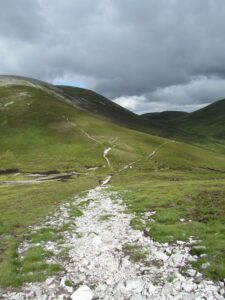 Me on Carn an Righ

The real highlight for me, however, was the view to the north. From Carn an Righ, you look right into the Lairig Ghru, the wild, remote hill-pass through the heart of the Cairngorms. 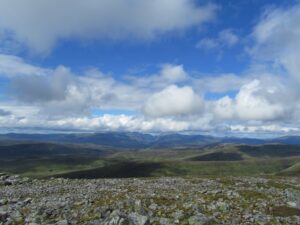 Looking north from Carn an Righ 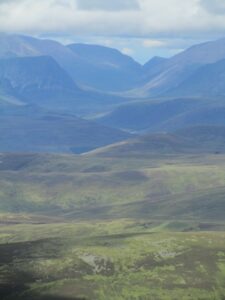 Looking into the maw of the Lairig Ghru 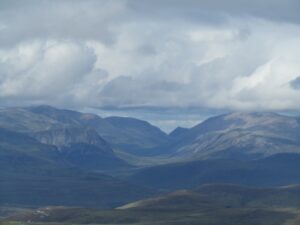 All very well, taking in these glorious views, but it’s a long walk back to the car. The return routes drops down Gleann Taitneach, a stunning, picturesque glen. 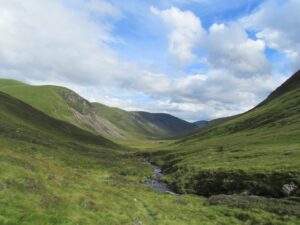 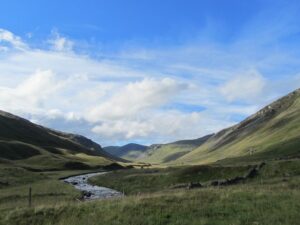 Looking back along Gleann Taitneach

And that was it! Just another mile or so back to the car. Here’s what my GPS has to say about the day:

This entry was posted in Day Trips and tagged in Hillwalking, Scotland.