From Gerry’s Hostel, it’s a short drive down to Achnashellach to start on Beinn Liath Mhor. I’m hoping to continue round and include Sgorr Ruadh, and perhaps also Fuar Tholl if I have enough energy. 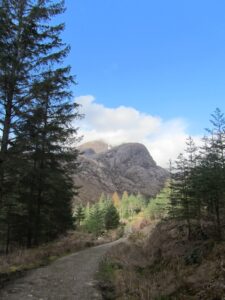 First glimpses of Fual Tholl through the woodland 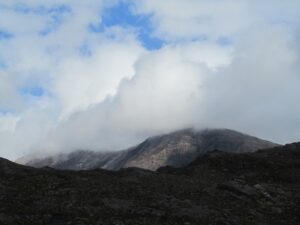 Panorama of the three peaks from the corrie

There’s cloud on the tops, but the forecast is for it to clear, and it’s true to its word, with the last of the cloud disappearing from Sgorr Ruadh as I reach the Coire. It’s then straight up the very steep flank of BLM, reaching the first top 2 hours after having set out. The views are stunning, with the ridge stretching out before me and the Torridon mountains to the right. 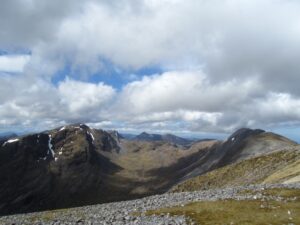 View to the summit of Beinn Liath Mhor, with Sgorr Ruadh round to the left and Beinn Damh in the distance

Amazing panoramic views from the start of the ridge, left-right Fuar Tholl, Sgorr Ruadh, Beinn Liath Mhor, with the Torridon hills visible to the right in the distance 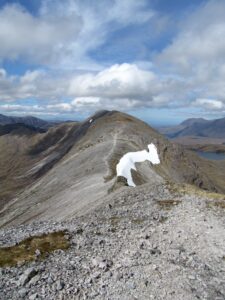 Looking along the ridge towards the summit of Beinn Liath Mhor

Check out this ‘immersion’ panorama taken with my phone:

Some light scrambling on the ridge but fairly easy going. I’m at the summit 3 hours in, and just have to sit down and soak up the incredible views towards Liathach. 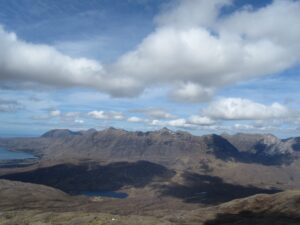 Liathach with the other Torridon hills behind it

Panorama over Loch Torridon with views to Skye and Harris 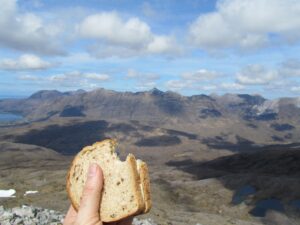 Feeling full of energy and buzzing from the great weather, with visibility which stretches to the Isle of Eigg, I head off down the hill certain that I’ll at least tackle Sgorr Ruadh. It’s a tough descent to the bealach, with a steep scramble down a cliff at one point and not much of a path for the most part. It’s tough to lose so much altitude and stand, looking up to the next summit, knowing that an hour previous I was looking directly across at it. The sun is also starting to take its toll, and I even put on my thick winter hat for protection, not having anything else. My arms and the backs of my hands, and the back of my neck, still, 3 days later, testify to the strength of the late April sun, and my lack of forethought in not covering up even more.

Looking down the corrie from the bealach, with the ridge on the left and the steep slopes of Sgorr Ruadh on the right 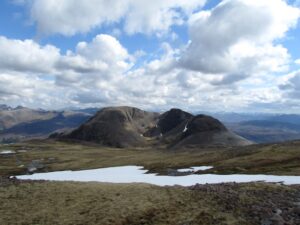 Near the summit of Sgorr Ruadh, looking to Fuar Tholl 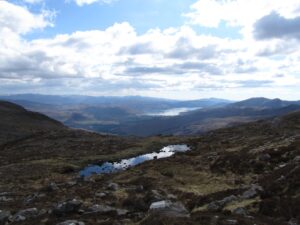 A steep climb follows, with a pause to chat to a pair of descending hikers, before the summit of Sgorr Ruadh is reached after scree slopes and some exposed light scrambling. I’m starting to run low on water, and after a brief stop continue downhill, at this point starting to notice that I’m becoming tired, and reluctantly deciding to give Fuar Tholl a miss on this occasion. The right decision, as it’s a slow, tricky descent from Sgorr Ruadh, with no discernible path. However, once the track proper is reached, it’s a very fast return back down to the Coire, and eventually the car park, just short of 8 hours after having set out.

Interesting guest at the hostel tonight – a woman who is walking the Cape Wrath Trail, running from Glenfinnan to Cape Wrath. She had spent 7 nights camping and in bothies; Gerry’s was her first night with electricity, and an opportunity to take on more food, which she had posted ahead.

Glas Tulaichean and Carn an Righ