Slioch is a well-known munro at the south end of Loch Maree, reached from Kinlochewe.

Another early start, packing up and leaving Gerry’s, for the short drive up to Kinlochewe, to start on Slioch shortly after 9. It’s a very pleasant and mostly flat walk in along the side of Loch Maree, and sun is already blazing as I leave the car. I tear along the track, making the most of the walking poles, catching a group just at the river where we turn away from the loch towards the flank of this massive mountain. Not ready for a break, I start up the boggy track, only pausing to put on my gaiters. It’s a steep climb up to the coire, and I quickly notice my tiredness resulting from a poor night’s sleep. 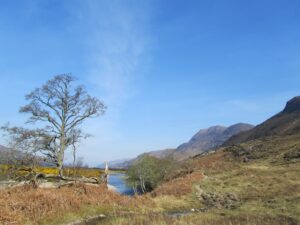 After numerous short pauses, I reach the Coire and take my first proper break. I need it, because the sight of the continuing route is daunting. The track traverses up the slope to the ridge and immediately turns into what looks like a near-vertical series of traverses over reddish scree. Well, it’s not going to climb itself, so I get started, helped no doubt by the fact that there are two walkers a little way ahead of me approaching the base of the track. I quickly catch and pass them, but knowing they are close behind I press on relentlessly, eventually, after what seems like an eternity, reaching the first summit cairn … which of course only reveals another steep ascent to the true summit! This truly is a hill of epic proportions, and it’s turning into a case of love and hate for me. 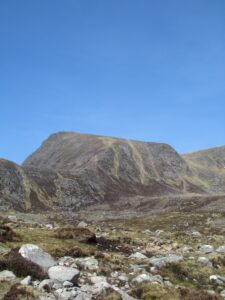 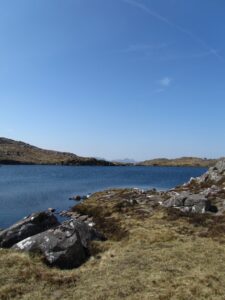 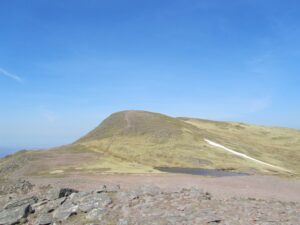 The true summit is reached, after pausing to let the group of Belgians know that they are resting at the cairn a metre below the true summit. I think only one of them follows me over to the top. Although a little hazy, the views are immense, over Loch Maree, to Beinn Eighe, to An Teallach. And the ridge, stretching out from the surprising grassy plateau just below the summit, looks to be an enticing and exciting continuation – the reward, perhaps, for the pain endured in reaching the top? 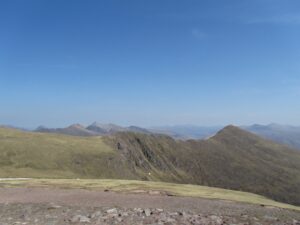 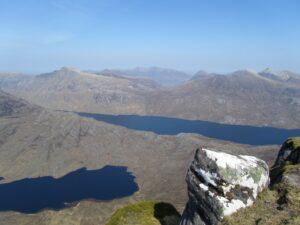 Indeed, for me, the ridge is the highlight of this outing, as you trip along, scrambling over rocky outcrops, all the while with An Teallach brooding in the distance and the spiky outline of Sgurr an Tuill Bhain growing ever closer. Another short pause at the summit, again cursing my reticence in not bringing my larger platypus water bottle along as my water supply dwindles for the second day in a row. It’s a steep, often pathless, descent, time-consuming and stressful under the beating sun. On reaching the Coire, I turn left to take the track running alongside the stream, which, in a series of waterfalls, drops steeply to join the larger river running through Gleann Bianasdail to Loch Maree. 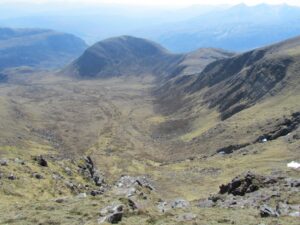 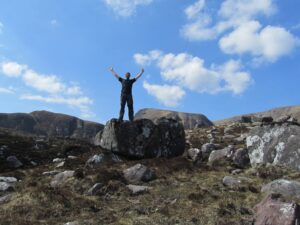 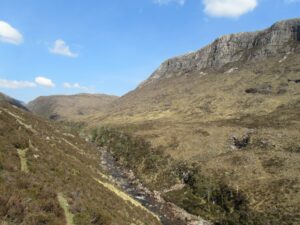 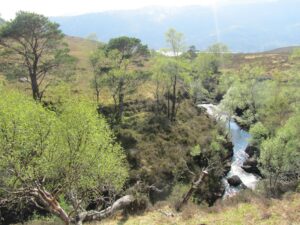 This is a steep, fast descent, but the track is fairly easy to pick out. There’s a better track at the bottom, although it’s a little eroded in places, and runs close to some big drops above the river. But it’s an exhilarating fast hike, as the river goes from gently and shallowly running over pebbles, to cutting through a series of gorges, with scots pines perched precipitously on their edges. The birch woodland further up the slopes below the impressive cliffs of Beinn a’ Mhuinidh is a beautiful display of light green – a colour surely only displayed when the leaves have only just emerged in spring. With the last of my water gone, I hightail it back along the lochside track to the car, and it does feel like a long, long way on the return leg.

With such great weather, there’s no way I can turn inland again just I order to reach Ullapool a little earlier, so I take the ‘long way’ round, through Gairloch, stopping for an ill-advised fish supper in Ullapool (very greasy) and arriving in Achmelvich at 8:30, having spent most of the intervening drive soaking up the stunning Assynt scenery. 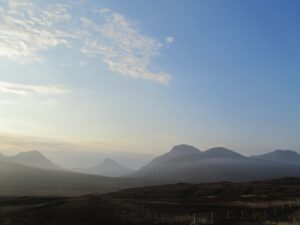 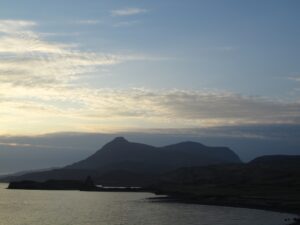 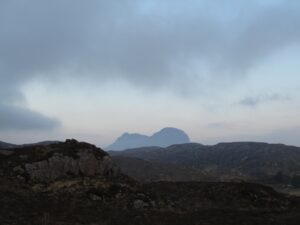