Another year at Wiston

I ended my last entry, dated 30th December 2006, with the comment that my next entry would be headed 2007. As it turns out, here we are in March 2008! So I’ve got quite a lot of filling in to do, and I’m mainly going to post a lot of photos and a few paragraphs about what I’ve been up to for the past 13 months.

I’m still at Wiston Lodge, must be about a year and a half I’ve been here. I’ve found somewhere to settle down for a while – put it this way, I have moved so much of my stuff here that I can’t pack it all up into a rucksack and head off, the same way I arrived!

Wiston is a wonderful place, I haven’t had to think very hard about staying here, it’s just happened naturally. Mainly I’ve been looking after the garden here, which has been a steep learning curve. Going from helping in other people’s gardens a couple of times, to being responsible for the large kitchen garden here at Wiston was quite a leap. I’ve had lots of help, particularly from my gardening mentor Amy, and I’m looking forward to my second growing season starting soon. 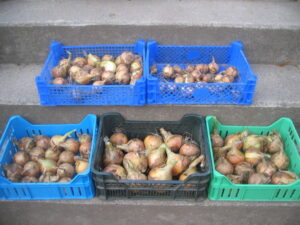 Early in 2007, the folks at Redhall Walled Gardens persuaded to me to apply for a grant from Scottish Natural Heritage. I came up with a project that involved creating a wildflower meadow and native species hedge, with plants and equipment funded by SNH. The application was successful, and so quite a lot of my time last year was spent managing the project. This covered managing the physical work of creating the meadow and hedge, but also procuring tools and equipment for the garden. The upshot is that the garden tool shed has been transformed, previously having a handful of spades and forks, it now has pretty much every garden tool imaginable – hoes, cultivators, loppers, etc etc. This means that we can now get volunteer groups of 20-30 people involved in the garden and grounds – in the past, Redhall Walled Gardens had to bring all their own tools. 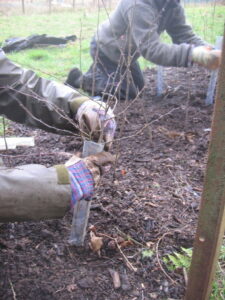 The project ostensibly finished last year, but it takes time to create the wildflower meadow and native species hedge. The area for the meadow has been cleared of vegetation, and will be sown with the seed next winter. The hedge was planted a couple of weeks ago, and looks fantastic. There’s a mixture of hawthorn, blackthorn, hazel, guelder rose, dogrose, broom, holly and gorse, and it should be quite a sight once it has grown a bit.

I enjoyed the process of applying for and managing the grant, although at times it could get frustrating. I always seemed to end up spending hours on the Internet sourcing equipment just when the weather was at its finest. There was also some pressure to get the money spent and the objectives achieved, but it was a nice change to have some responsibility and a little stress just to keep me on my toes.

One of the great things about living and working at Wiston, however, is that life is varied … very varied! Amongst other things, I’ve been clearing drains up on the roof, looking after the hens, ducks and geese, driving the tractor, driving a mini-digger, building water butts and getting into mechanics. Our tractor is a David Brown 1290, approaching 30 years of age, and I’m slowly learning enough about mechanics to keep it running for another few years. Not very much works on it, but I did just fix the throttle footpedal and the handbrake, which will make it a little safer to drive! Wiston Lodge was gifted 4 wooden chalets last year, and we have been installing them at the top of our campsite. I’ve been driving the mini-digger, digging trenches for drainage, sewage and electricity. Could life be better, getting to play around on tractors and mini-diggers? 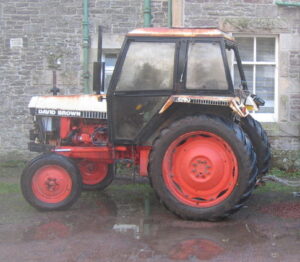 For 60 years, Wiston Lodge was owned by the YMCA and operated as an outdoor centre. A couple of years ago the YMCA decided to sell the lodge and grounds. Meg, the manager, and many others, managed to raise enough funds through loans and supporters to buy the lodge from the YMCA, so that it could continue its work with at-risk youth groups and other vulnerable people. The sale was completed in June 2007, and marks the start of a very exciting period here. As an independent charity, we can now apply for grants and funding. Extra investment will allow us to carry out essential repairs, add more activities for visiting groups, and expand our capacity. 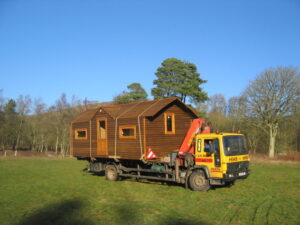 I’m going to finish this entry with some photographs from February 2007. A water pipe had a small leak where it crossed a stream, and with the sub-zero temperature it created some amazing ice effects. 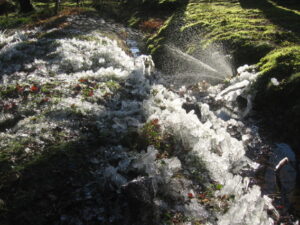 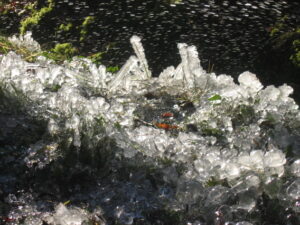 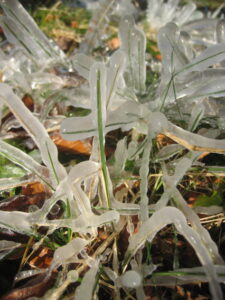 The villa and surroundings