Not written anything for a while… what have I been up to? Working mainly on the new house, I’ve helped with putting flooring in, cladding the walls, putting in windows, and various other bit and pieces. This was how the bungalow looked when I arrived – I should really have another picture of how it looks now too, shouldn’t I?

I’ve also been spending a fair amount of time moving stones from around the croft down to in front of the bungalow, where a stone-waller is going to transform them into an attractive wall. The stone moving is being done using a combination of brute force and the quad & trailer. It’s great fun driving a quad, much less so when you’re also towing a trailer full of stones – slows things down a bit. Nonetheless, here is the mean machine pictured beside an old wall I’m tearing down. 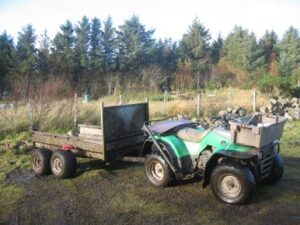 Hugh and I visited Raasay a few weeks ago, to look over a windmill installation right up in the north of the island. It was great to visit somewhere we used to go on holiday when I was a kid, and it doesn’t seem to have changed very much. 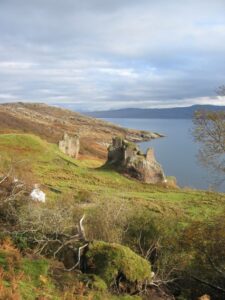 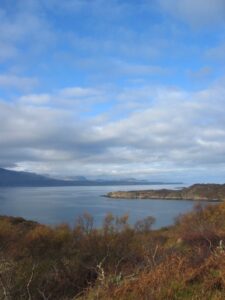 Looking across Arnish Bay, Raasay, towards Trotternish on Skye

A Short Essay on Life on Scoraig

Much of the time, life is fairly predictable. I’ll get up between 7:00 and 8:30 – if 7:00, I’ll do some yoga. Then breakfast and out to work either on the bungalow or moving stones. Lunch around 1pm, and back to work until the light is too poor to continue – around 4:30 at present. Dinner, check email, some TV or reading and so to bed. Might as well be earning some bucks programming back in Edinburgh? I don’t think so. Being able to pause in my work and look up at Ben Ghobhlach or over to An Teallach, both now topped with snow… 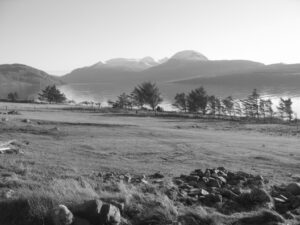 …to be outside and experiencing the elements – that’s what it’s all about. We’ve just had three days straight of glorious weather; bitingly cold and frosty in the mornings, but without a cloud in the sky all day, with the sun barely rising before it trips west and sets behind Stattic Point, very much like this. 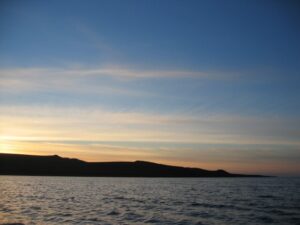 So far, so good. Every so often I’ll take some time off to go for a wander, visit someone or just spend time reading. On Sunday afternoons I go to a life drawing class at the secondary school. This is a 6-week course and is great fun, giving me a chance and the structure to devote some time to drawing. Taking a drawing class is something I’ve always thought about whilst in Edinburgh, and never felt I had the time to do – this is the ideal opportunity!

However, life here is still much more unpredictable than in Edinburgh. Ferrying is a task that crops up fairly often, unsurprisingly. A couple of days ago, Hugh had a delivery of timber to pick up from the other side of the loch. 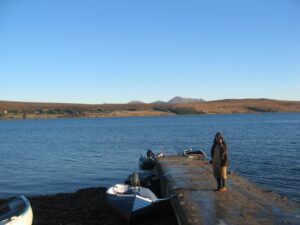 The jetty at Badluchrach, looking back towards Scoraig, with Ben More Coigach in the background

The boat we were using to ferry this timber wasn’t huge, but it was more or less flat calm, and the loading guidelines for these things are just … guidelines, after all. Smooth sailing, we made it back across with the wood! 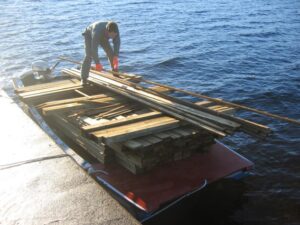 Timber ready for unloading onto the Scoraig jetty

(There were three of us in this boat on the way back, I can’t actually remember how we fitted in, doesn’t look like there’s room…)

I’ve had a shot of steering the boat a couple of times. Coming into the jetty is tricky as the outboard motor is controlled with a twist grip throttle. Controlling direction and speed all with one hand can get a bit confusing – no damage done yet though.

A while ago, some guys bought 8 piglets to fatten up for eating next Spring. They went to pick them up from Lairg on 5th November. At about 4pm we heard that the van with the pigs in it had slipped off the pier at Badluchrach – both the van and pigs were eventually rescued, but one of the piglets drowned in the process. Given the van was floating around for 15 minutes, that’s probably not bad going. They’d made it over to Scoraig and bedded-in 5 of the pigs. One was still suffering badly from the experience, shivering and very cold, so it was brought into the house and put in a cardboard box in front of the Raeburn. The second most poorly piglet was also brought in, and after sparking up a bit they were allowed out and given the run of the kitchen – a freedom which was curtailed as soon as they started shitting on the floor. All seven are now happily frolicking around their pen, and run up with excited grunts when I approach. As I don’t produce any food, they soon lose interest and return to poking around in the mud. 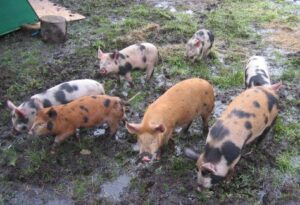 Last weekend there was a meeting to discuss the possibility of a community buy-out of the Scoraig peninsula. A guy from the Community Land Unit had come over, and about 16 folk assembled. However, there doesn’t appear to be a great deal of support for the idea. Scoraig, unlike other some places, enjoys a benevolent laird who lets everyone just get on with whatever they want.

Scoraig is no hippy idyll. It is not an ‘intentional community’, but it is, I think, very much a community. Where necessary, neighbours and friends come together to help each other. At the same time, there are the usual disputes and disagreements to keep things interesting and gossip flowing. Many people have come here to live a certain kind of lifestyle; one which is more self-sufficient than most, and to a great extent free from bureaucratic interference. However, pragmatism is the order of the day – boatloads of supermarket shopping, bags of coal, and so on are not uncommon sights. There’s plenty of work to do, things to fix, and not all of it gets done, but it’s no big deal. It’s fascinating, and only a little frustrating, and I don’t think I’ll want to leave when the time comes.

There’s blizzards forecast for tomorrow, should be interesting. It’s not all precipitation though – who’d have thought you could grow grapes at this latitude? 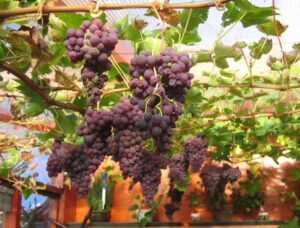 Grapes growing in the far north