Yesterday I left Rubha Phoil on Skye to travel to Scoraig in Wester Ross, to work and stay with Hugh Piggott. Having arranged to meet up with Hugh in Inverness, I was planning to hitch. Luckily Sandy managed to get me a lift with one of her friends all the way to Inverness, which was very convenient.

Like Knoydart, Scoraig is a mainland peninsula without road access, so you can either walk in or use a boat. Unlike Knoydart, Scoraig doesn’t even have an ‘official’ ferry. Residents commonly have a wee boat with an outboard motor that carries them, their shopping, family, equipment, rubbish etc over the one mile crossing. Two boats are strapped together to transport vehicles across.

So yesterday evening, around 7:30pm, Hugh and I got to the jetty opposite Scoraig. Earlier an easterly gale had been blowing down the loch (Little Loch Broom), which would have meant a 5-mile walk in with as much stuff as we could carry. Fortunately the wind had died down, but it was still a slightly unsettling experience making the crossing in fairly choppy waters in near darkness. Particularly as Hugh’s boat is an aluminium 16-footer with a 5-horsepower outboard…

The boat is simply beached on the pebble shores on either side of the loch. It has to be hauled down to the water and moored to the jetty whilst loaded. Given that the conditions weren’t perfect for crossing, we didn’t overload the boat, so some shopping and most of our luggage was left in the car. This was all done in wind and rain and with torches gripped in our teeth! We were met on the other side with a quad bike. After we’d beached the boat, the quad is used to drag it up past high tide. Five minutes up the track on the back of the quad and we were indoors and warm and dry again. 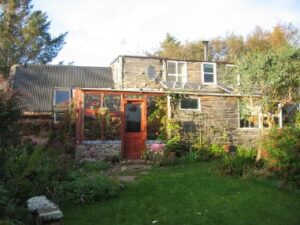 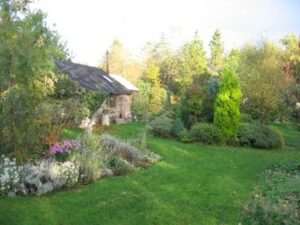 Today, we returned to the other side of the loch to pick up the rest of our stuff. On the way back I got to steer the boat – after the crossing last night, it was nice to go over in calm, sunny conditions. Spent the rest of the day collecting seaweed and spreading it over turned-over earth in the garden, to mulch down in readiness for next year’s planting. 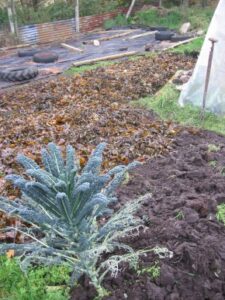 Turned-over earth in foreground with seaweed covering the earth behind