I returned from Pitnacree last Sunday, and leave for Eigg tomorrow morning. This post will cover my second month with Jacqui in Pitnacree.

In the garden, things were fairly slow what with the cold, then wet, weather. However, we still managed to plant out onions, garlic and shallots, and set up some ‘potato tyre stacks’. Conventionally, you might plant potatoes in rows in a bed, which takes up a lot of space and requires a lot of digging to get the tatties out. Tyre stacks are a way of both reducing the footprint of potato growing, and make harvest easy: Plant seed potatoes in a tyre and fill with compost and straw. As the shoots grow up, place another tyre on top and again fill with compost and straw – this causes more potatoes to grow at the level of the second tyre. This may be repeated up to four or five tyres high. Harvesting is as simple as removing each tyre and shaking out the potatoes. That’s the theory anyway… 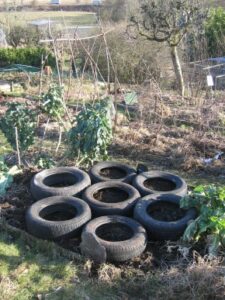 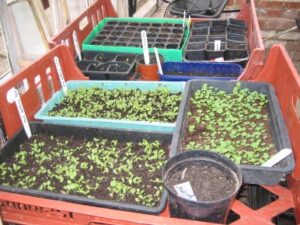 We also started some plants germinating in the greenhouse, including rocket, lettuce, cabbage, basil, coriander, echinacea and beans. These will be moved outside into cold frames, and then into the ground, as they continue to grow.

Another new skill, though not one I hope to have much cause to use, is tree-moving. I moved four trees at Jacqui’s, the largest being a Damson Plum tree 8 feet high. The idea is that you estimate the root ball of the tree, dig it out and pop it in its new hole as soon as possible. Easily said, harder done, I found. It’s a traumatic experience, digging around what you hope is the main root ball and cutting through root after root. Even with trees as young as these were, it still seemed impossible to cleanly dig out the root ball, so there was also some tearing too. Traumatic for the tree and the mover; I have my fingers crossed that all four will survive their transplants. Maybe I’ll be able to return in 20 years and see all four fully grown. 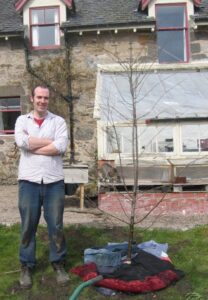 Me with a just-moved plum tree

A little project Jacqui had me work on was to create some seating for her fire-pit. This was a tussocky sloping area where the Beltane bonfire is lit every year. I levelled off an area and used rammed-earth car tyres to make a two-tier seating area and some steps. 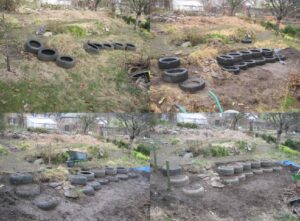 Creation of seating for fire pit

Yep, looks like a mud bath, but have planted grass seed everywhere so hopefully it will be lush and green by Beltane.

More digging, this time helping to finish off Robbie’s path. Robbie and already levelled-off the route of the path, and I put in plank retainers on either side, with terram first to inhibit the growth of weeds. Popped in some stakes to keep the planks and log steps in place, and then Robbie and I shovelled on the wood chip covering. 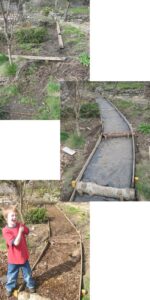 Robbie’s path: Yes, it’s another of my ‘before-and-after montage specials’!

Given the poor weather, there was also plenty of time to cover some more herbal education. We also made soap – not difficult but rather time-consuming – and I learnt to spin. I now have two skeins of wool, so now I just need to learn to knit or crochet and I’ll be a one-man garment factory.

Need to round this up, have an early start tomorrow. Here are some pics of Jacqui and her bees, from which she harvests the best honey I’ve ever tasted. 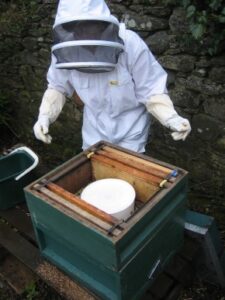 Jacqui opening up the beehive

Nice little chaps they were, I got this close without the spacesuit on but was unharmed! 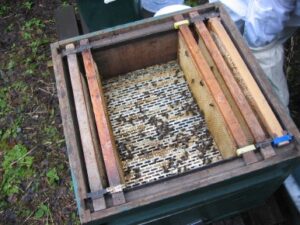 So tomorrow, catching the train to Mallaig and ferry to Eigg, where I’ll be staying with Bob and Norah and helping out with their project: renovating the delapidated old lodge on Eigg into an environmental education centre. As always, watch this space for more!

On the Isle of Eigg