Have been busy working on a redesign of the site, amongst other things, which is my excuse for not having posted a diary entry for almost 2 months! This entry will look back at my remaining time on Eigg at the end of April and start of May.

Most of my time during this period was spent on repairing the wood shed at Gardener’s Cottage, the volunteer accommodation. It had a tree land on it at the end of last year, and was no longer watertight. 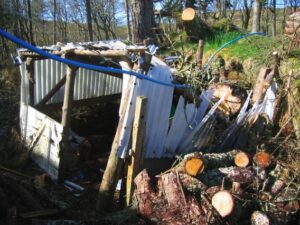 The woodshed, before I started working on it

Had to use whatever timber was lying around, which was an interesting challenge. I replaced some of the uprights with sections of nearby fallen tree trunks, and re-used some of the broken timber for smaller spans. I was also limited to a bucket of rusty nails – in fact I’m just getting some excuses out of the way in case it collapses at a later date! Unfortunately didn’t have time to finish the job, and don’t even have an ‘after’ photo as it was raining solidly for the last three days of my stay.

The blue pipe in the foreground of the photo above is the water supply to the cottage. It feeds from a stream further uphill, but not beyond the treeline, so little bits of pine needle and bark were quite common. One day I noticed that this pipe appeared to have been punctured, and a little fountain was spraying out. On closer inspection I found a rusty old nail stuck into the pipe. I was quite perplexed as to how this nail could have ended up piercing the pipe, and pulled it out … big mistake! As I got soaked by the now large jet of water spraying out of the hole, I realised that this nail had obviously been placed there on purpose. I later found out that it was intended to be used to release an airlock which sometimes developed at that point, and must have worked slightly loose hence the small fountain. It was a lot of fun trying to stop up the hole with a new nail – full waterproof gear was called for.

Still on the plumbing, the hot water in the cottage was heated by a back boiler in the stove. One evening, as I was throwing a couple of bits of firewood into the stove, I heard an unusual hissing sound. Thinking it must have been a particularly wet bit of firewood, I thought nothing more of it. Until I noticed that the floor around the stove was covered in water, and the water was spreading out into the room, soaking the rugs. Turned out that the back boiler had sprung a leak and was pissing water out into the stove. It was too late for the emergency plumber to get a ferry over from the mainland, so after some consultation with Bob I tackled it myself. There wasn’t much option other than to let the hot water system drain out through the hole, but to stop the header tank continually refilling, I had to climb up into the loft crawl space and disarm the header tank ballcock. Armed with a torch and a bit of string, I climbed, crawled, and tied up the ballcock. The water took hours to drain, but we managed to get most of into buckets although the floor and rugs still got a soaking. That was the end of hot water on tap in the cottage, so had to resort to boiling water on the cooker for washing.

Talking of washing, I think my laundry schedule deserves some mention here. Obviously without electricity, there was no washing machine. I had brought some washing powder with me, so I was hand washing my clothes in the kitchen sink. I’ve done this before when on holiday, and have always been annoyed at how hard it is to wring out the water in the clothes before hanging them up to dry. I was very pleased, then, to find a proper old-fashioned mangle in the shed. “This is so 1950s,” I thought, as I turned the handle and dragged my wet laundry through the rollers – all I needed was a washboard and my transformation into a red-skinned, raw-handed washerwoman would be complete!

Maybe that’s enough back-to-the-earth, wholesome, Good Life nonsense for now. I also went on some more walks with my digital camera, as I haven’t entirely renounced the 21st century…

Cleadale, in the north of the island, is the main centre of population, and is nestled at the bottom of some impressive cliffs 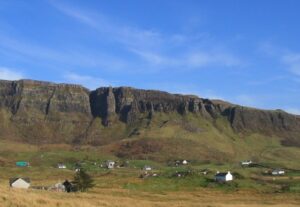 I cycled to Cleadale so I could visit the Singing Sands beach – a beach where the sand is supposed to squeak (adjective adjusted for poetic license) underfoot. Having been warned that the singing sand only occurs under the right conditions I was ready to be disappointed, but, after going for a swim, I wandered onto a bit of sand that did indeed emit a squeaky scrape as my feet brushed over it. I even made this video as evidence: 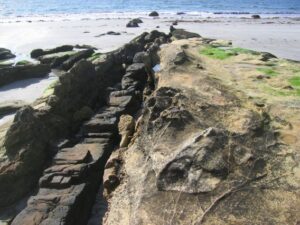 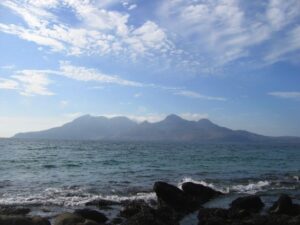 Rum from the Singing Sands beach

There was a woodland and gorge near the Lodge that was carpeted with ramsons (wild garlic), which created an incredible effect. 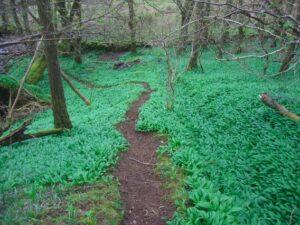 A path down through the ramson ‘meadow’

These ramsons were so ubiquitous, they coated the slope of the gorge and even the root stump of a couple of fallen trees.

These ramsons will grow anywhere!

I decided to leave Eigg a little earlier than planned, to sort out my flat in Edinburgh, and so didn’t even get round to climbing the Sgurr. Hope to go back at some point this year for some more volunteering and exploring.

Back in Glasgow after Knockengorroch